This article was taken from Construction Enquirer and can be read in full by visiting their website direct.

A near 13% fall in new work output drove the overall decline after large falls in public building and private office building. 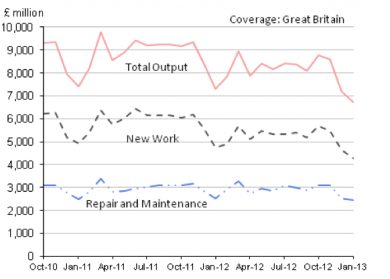 There was also a 5.3% decrease in repair & maintenance, mainly due to a big fall in private housing repair and maintenance.

The move volatile monthly figure for total output in January alone was 6.3% lower than in December and 7.9% lower than it was one year ago.

Steve McGuckin, UK managing director of the global programme management consultancy Turner & Townsend, said: “Sadly the momentum of the last quarter of 2012 has not been maintained, and the construction sector risks being recast as the fall guy of the British economy.

“Across all construction sectors, output is down once again, with the fall in infrastructure work particularly worrying.

“The government’s hopes of the private sector pumping desperately needed money into infrastructure and helping the economy build its way to recovery look further away by the day.”

He added: “Q4’s brief uptick in total construction output is starting to look like a blip, possibly boosted by projects put on hold during the Olympics and restarted at the end of the year. Shorn of that temporary boost, January’s figures look much less encouraging.